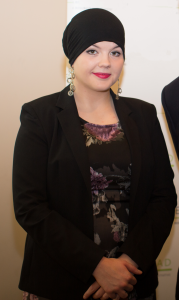 On Monday night Spear graduate Khadeejah addressed the Duke of York, along with more than one hundred business leaders at an event held at Buckingham Palace. Khadeejah, whose speech was described as “incredibly moving”, told about her life growing up in the UK’s social care system, where she had to deal with abuse, teenage motherhood and long-term unemployment, before then praising  Spear for the transformative effect the course has had on her life. She commented:

Khadeeja, who was unemployed, is soon to begin her training to become a nurse.

The evening was part of the Duke of York’s Backing Youth campaign, connecting business leaders with pioneering charities who are making a positive difference to the lives of disadvantaged young people across the UK. Khadeejah was one of only two young people selected to speak at the event, explaining the transformative impact organisations like Spear can have.

Spear was chosen to be part of Backing Youth due to its exceptional results in helping young people like Khadeejah into work. 75% of those who graduate from the award-winning Spear course get into work or further education and are still there a year later.