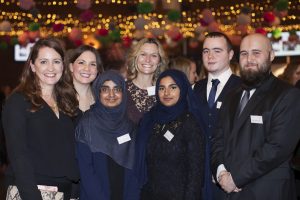 Camden Spear Trust (CST) held its fifth annual fundraiser on Thursday, March 9th, at its centre on Finchley Road, raising over £70,000 to continue to transform the lives of 16-24-year-olds in the local community by getting them into work.

Volunteers and trustees transformed the venue into a sparkling garden, with live jazz, coveted auction items, such as tickets to see Adele, and a showcase of the trainees and alums who have benefited from Spear.

Since launching CST in September 2013, over 234 young people have completed the foundation programme at the centre, and many have achieved job placements in companies such as, the National Theatre, John Lewis, Accenture, Sainsbury’s, Knight Frank and Camden Council.

CST is supported by Tulip Siddiq, Member of Parliament for Hampstead and Kilburn, who said, ‘I am glad to see that the fantastic impact Spear makes on the lives of so many young adults in Hampstead and Camden, is growing from strength to strength.

I would like to reaffirm my support to the work that Camden Spear Trust do to improve the employability of young people amongst our different communities’.

The live auction was excellently executed by Carrie Longton, co-founder of Mumsnet and long-time supporter of Spear and Revd Kristin Breuss, Chair of CST.